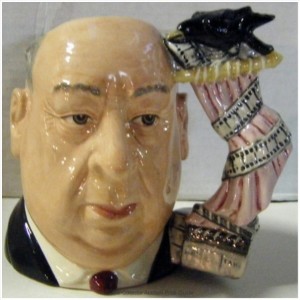 It was released in 1995 and withdrawn from sale the same year due to copyright issues. The later edition included the MCA Universal Studio backstamp and the shower curtain on the handle was changed from pink to white. Due to the limited numbers produced of the original version it has become rare.

Doulton prices have dropped over the last few years however there is one currently for sale in the $600 range.
Even so not a bad investment and a pretty good profit was made!!

For auction this Thursday night 21 Jan this 1970s

We're having fun unpacking boxes and working on this auction. More photos will be added next week.
Entries are welcome and goods can be dropped off to our rooms on Mon, Tues & Fri 10-6pm.
Look forward to seeing you! ... See MoreSee Less

Share on FacebookShare on TwitterShare on Linked InShare by Email

Share on FacebookShare on TwitterShare on Linked InShare by Email